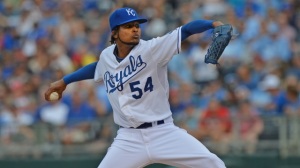 Kansas City exploded for six runs in the bottom of the 6th inning Friday night to erase a 6-3 Boston advantage and went on to secure their 15th win in the last 17 outings with a 9-6 victory. The Royals pounded Boston pitching for 16 hits, including three home runs to take the first two games of a current four game series and continue their scorching second half run following the All-Star break.

After taking the 9-6 lead, Royals relievers Francisley Bueno, Kelvin Herrera, Tim Collins and Greg Holland closed the door on Boston over the final three innings of play. Bueno was credited with the victory while Holland iced his 31st save in 33 attempts.

The Red Sox and Royals played tit-for-tat early on. Boston broke out to a 1-0 lead in the first when Shane Victorino reached on a single and scored on Daniel Nava’s RBI single off Santana. Kansas City responded in the bottom of the second frame. Justin Maxwell tagged Jake Peavy for his 5th home run of the season to tie the score and KC moved in front 2-1 when David Lough singled home Alcides Escobar. Peavy struggled early, tossing 61 pitches over the first two innings against the Royals.

Boston grabbed a 3-2 lead in the top of the third when David Ortiz slammed Santana for his 22nd home run of the year to tie things at 2-2. The Red Sox moved to a 3-2 lead after Mike Naopli was hit by a pitch, moved to third on Stephen Drew’s single, and scored on an RBI double by Jarrod Saltalamachia.

The lead was momentary as KC answered in the bottom of the third with Alex Gordon’s 12th home run off a struggling Peavy to make it 3-3. Jacoby Ellsbury made a catch at the centerfield wall off the bat of Mike Moustakas to keep things tied.

Boston chased KV starter Ervin Santana in the top of the fourth. Pedroia and Ortiz singled and Santana beaned Daniel Nava to load the bases with two outs. Mike Napoli, dropped down a slot in the batting order cleared the bases by drilling a three RBI double to center field to push Boston in front 6-3.

The Royals returned the favor in the bottom of the sixth, erupting for six runs to chase Peavy and take a 9-6 lead. Justin Maxwell and Mike Moustakas connected on back-to-back singles off Peavy to start the inning. Escobar followed with an RBI single for one run. Boston lifted Peavy in favor of rookie southpaw reliever Drake Britton who came on with two runners aboard and no outs. George Kottaras walked to load the bases. Then Britton got Mugel Tejada to foul out. David Lough followed with a SacFly RBI for the second run of the inning, then Brett Hosmer plated two more runs with an RBI double. Boston’s second reliever, Pedro Beato didn’t fare much better. Alex Gordon worked Beato for a walk and Kansas City made it 9-6 when Maxwell batted around in the inning and drove in Butler with an RBI single.

In his second start as a Red Sox, Peavy exited with an ugly pitching line, giving up 6 runs on 10 hits with two walks and no strike outs. He escaped a decision by virtue of a 6-6 tie for runners he was responsible for. Britton wound up taking the loss for Boston by virtue of giving up two runs in the two-thirds of an inning he pitched.

Ellsbury stole his league-leading 41st base of the night in the second inning and Drew extended his current hitting streak to 10 games with his third inning single.

Mike Napoli helped Peavy out of a fifth inning jam by turning in a double play. With runners at first and second, Napoli speared a line drive down the right field line off the bat of Alex Gordon for the second out and fired a strike to second base to double off Brett Hosmer to choke out a Royal’s mid-game threat. 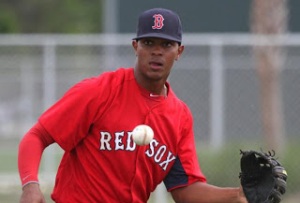 (Boston’s “X-Files”) The Xander Bogaerts call-up watch continues among Red Sox Nation. With Jose Iglesias traded to Detroit, Will Middlebrooks still sequestered at Pawtucket, and Boston getting credible defense but minimal offense out of third base, many are wondering if prospect Xander Bogaerts is just days away from a call up to the majors. Bogaerts has been splitting time between shortstop and third base at Pawtucket, and after an earlier season promotion from Portland to Boston’s Triple-A affiliate, it seems to boil down to, “He’s ready, what are you waiting for-versus-don’t rush him and screw up his development.” Since his promotion to Pawtucket, Bogaerts has appeared in 51 games for the PawSox, batting .291, scoring 25 runs on 55 hits with 11 doubles, 8 home runs and 27 RBI. He has an OBP of .381, Slg of .476 and Ops of .856. Last night against Syracuse he went 3 for four with a double and RBI. At present manager John Farrell has been platooning Brock Holt and Brandon Snyder at third base. The bottom of the Boston Red Sox order has been less than spectacular, minus the hot hitting of shortstop Stephen Drew, who has seemingly relaxed since Iglesias was traded and is stroking the ball well; enough to prompt Boston to move him up in the batting order and move strike-out prone Mike Napoli down a slot. It’s all but certain Bogaerts will be called up to the parent club on September 1. What bears watching is, if he is called up prior to Sept. 1, which could potentially make him eligible for the Red Sox post-season roster should Boston make the playoffs.

(On the medical mend) Outfielder Jackie Bradley Jr., out of the line up at Triple-A since July 31 with an inflamed elbow has been activated and is expected to be back in the PawSox line up tonight. Bradley is another anticipated September call up after impressing in spring training and making the Red Sox opening day roster before being sent down to get seasoning, at-bats and regular playing time.Back-up catcher David Ross was medically cleared today to return to full baseball activities and will begin his rehab at Double-A Portland. Ross is currently on the 60-day DL, having suffered a second concussion and has been sidelined since mid-June.

Lefty Franklin Morales is expected to be activated either Friday or Saturday, giving the Red Sox another southpaw reliever out of the bullpen, which helps with the DL status of lefty Matt Thorton. Morales has been on the DL since June 23 with a strained pectoral.

Clay Buchholz, who has not made a start since June 8, threw off flat ground Thursday with increased intensity and was scheduled to throw a bullpen session prior to Friday night’s game two with Kansas City as he continues efforts to work his way back into the Boston starting rotation. Buchholz has been sidelined with bursar sac issues in his throwing arm and has not taken the mound since June 8th. He was