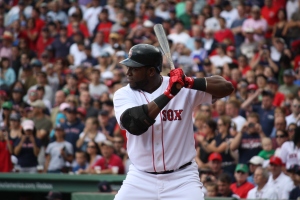 David Ortiz turned from smashing dugout bullpen phones to smashing baseballs Sunday afternoon in Baltimore, and Jon Lester was simply smashing. The end result was a 5-0 win by the Boston Red Sox over the Baltimore Orioles, marking the first time this season the Birds have been shut out at Camden yards.

Boston’s victory, along with a 6-5 win by the New York Yankees over Tampa Bay Sunday afternoon, moved the Red Sox back into first place in the A.L. East by half-a-game.
One night after being ejected for arguing balls and strikes and exploding in frustration by smashing the bullpen phone in the visitor’s dugout, Ortiz collected four hits in four at bats Sunday afternoon, including a two run homer, his 20th of the season, to back an excellent start by Boston southpaw Jon Lester.

Lester tossed seven innings of shutout ball, spacing out four Orioles hits while walking two and striking out eight to earn his 10th win against six losses on the year. Lefty Matt Thorton tossed a scoreless eighth inning for Boston and Pedro Beato came on to complete the shut out for Boston in the 9th.

Boston struck first, always a good omen for the Red Sox, who have been victorious in 44 of 53 games when they jump out to a lead. Mike Napoli’s RBI double off Baltimore starter and loser Jason Hammel in the first inning put the Red Sox in front 1-0.

Ortiz blasted his 20th home run of the season in the top of the third with Jacoby Ellsbury aboard thanks to his single to stake Lester and the Red Sox to a 3-0 lead. Combined with eight strike outs and some spirited defensive plays by Dustin Pedroia and Jose Iglesias, the Red Sox kept the Orioles scoreless despite two threats in the sixth and seventh innings.

Boston added a pair of insurance runs in the top of the eighth when Ortiz reached on a single, his fourth hit of the game, Napoli doubled, and pinch hitter Jonny Gomes, a .240 hitter, was intentionally walked by Baltimore to load the bases. Jarrod Saltalamachia then poked a cue ball single through the right side of the Baltimore shifted infield to score Ortiz and Napoli, making the game a 5-0 advantage for Boston.

The Red Sox showed some versatility and depth out of the bullpen by calling on Thorton to blank the Birds in the eighth and Beato to finish off Baltimore in a scoreless ninth.

The win moved Boston back to 20 games above .500 at 63-43 on the year. The win also improved Boston’s road record to 29-24 on the season and its record in straight up games against A.L. East opponents to 28-19. Boston also pushed back against Baltimore’s series dominance this season to improving to 4-6 against Baltimore on the year. The two teams will see each other nine more times between now and the end of the regular season, including a season-ending three game series at Camden yards September 27-28-29.

Boston will return home to Fenway for a 6:10 p.m. Monday afternoon make-up game against Tampa. David Price (5-5, 3.75) will square off against Felix Doubront (7-4, ERA 3.78) in a rescheduled rain out from last Thursday. Boston then entertains West Coast play at Fenway with a three game set against Seattle followed by a three game set against Arizona.

With only 72-hours remaining before the July 31 non-waiver deadline, Bosox fans are anxiously waiting to see if the front office stands pat with the team it has, or pulls the trigger on a trade or two to fill needs in the starting rotation, bullpen and perhaps even a right-handed bat with some pop.